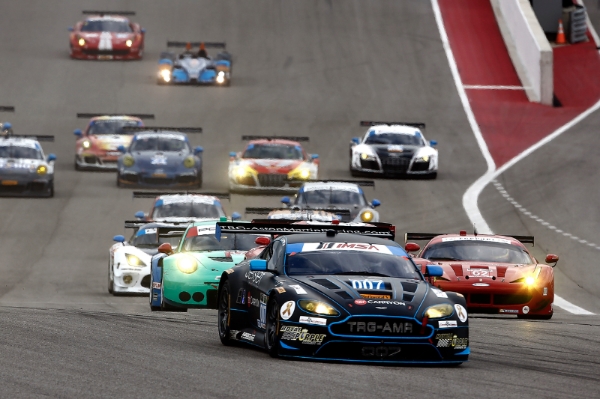 Austin, TX. (September 22, 2014) – The Lone Star Le Mans weekend at Circuit of the Americas has come and gone, a weekend full of great racing on this impressive track, though the results have left the team wanting more and focusing on the imminent Petit Le Mans season finale. Both platforms TRG-AMR raced here this weekend – the vicious V12 Vantage GT3 and the venerable V8 Vantage GT4 – did admirably well around the 3.4 mile circuit, with the overall finishing results a far cry from the proven potential of both cars.

In IMSA TUDOR GT Daytona competition the No. 007 JetSet Magazine / CarryOn.com / BePositive.org / PassTime USA Aston Martin V12 Vantage GT3 qualified in P1, the third consecutive pole position for the Northern California-based squad this year. TRG-AMR team driver Al Carter drove an incredibly strong first stint, with the car leading the race at times and never dropping from the top-5. As the race wore on, Carter turned the car over to his co-driver James Davison, who was leading the race before succumbing to a snapped axle upon completion of what would’ve have been the final pit-stop for the team, ultimately retiring the car.

Al Carter, TRG-AMR Team Driver: “What a feeling to be leading the race at this incredible track! The Aston Martin V12 GT3 is incredible – so potent and capable, but still composed enough to drive on the limit. I had a great time and more than held my own in the top-5 for my entire stint before turning the car over to James. Unfortunately, lady luck had her hand in the game and we suffered a broken axle on our final pit stop. That’s racing. I’m really looking forward to getting back in the car with James and David (Block) for Petit – it’s going to be a great race.”

On the Continental Tire SportsCar Challenge side of the house, TRG-AMR had two V8 Vantage GT4s competing in Grand Sport competition, with both cars full of enough talent and experience to fight for the win. The No. 07 DriverWebsites.com/Black Rider Racing Group V8 Vantage GT4 piloted by Max Riddle and Kris Wilson has been a top-flight contender all year, having set numerous fastest laps, pole positions, and two victories during the course of the season. In the No. 09 DriverWebsites.com/Black Rider Racing Group/Petrol Lounge/B.R.M./AutoSportDesigns V8 Vantage GT4 was IMSA veteran Tom Papadopoulos and World Challenge driver Derek DeBoer gunning for the win. Both cars ran extremely well with Max Riddle running a brilliant opening stint and keeping the car up front until minor contact with a fellow competitor put the car in the garage for suspension repair. Tom Papadopoulos had a fantastic start in the 09 car and continued to advance through the field and turning his fastest laps of the weekend. Tom turned the car over to Derek Deboer just as it started to rain and Derek had to perform one of the most challenging driving stints, running the car for an entire hour in drizzling conditions on slick tires. Both Derek and Tom drove flawlessly and the car finished without a scratch.

Tom Papadopoulos, TRG-AMR Team Driver: “It was great being back in an Aston Martin. Years ago I did a development program with AMR during the R&D phase of what became the DBR9 that went on to win Le Mans and other international endurance races multiple times. It felt great to be back in the seat and to see AMR clinch the victory in GTE Pro and a 1-2 finish in GTE Am during the WEC race. I’m hoping to get back in the seat of an Aston Martin soon – keep an eye out!”

Derek DeBoer, TRG-AMR Team Driver: “It was a great weekend for me personally, even if it wasn’t the best result we could’ve hoped for. Driving COTA in an Aston Martin is certainly an item for the bucket list, and it handled the track amazingly. I also had a great time with Shane Sterling and the Black Rider Racing Group people – they helped bring DriverWebsites.com and Petrol Lounge on board for the weekend – developing relationships like that is always a sucess in my book. I’m looking forward to getting back behind the seat again soon during the teams’ rather grueling winter testing schedule in preparation for the 2015 Rolex 24, as well as World Challenge and maybe some more Conti GS competition.”

Kevin Buckler, CEO, TRG-AMR North America: “We came to COTA knowing we had a strong chance to win in both classes and of course it started off great. Getting the pole position in GTD for the third straight race was just fantastic but my favorite part of the weekend was watching Al Carter drive the wheels off that Aston in his opening stint! He was out front and dicing it up with some of the best in the business and kept the car in the top five for his entire stint – he did a really great job! Then we had the unfortunate incident

with James coming off the air jacks for the pit stop and having the axle snap. That was a bummer because we had a car that could have won this race again this year. On the GS side, we had an equally strong program with Max turning in an amazing qualifying run and a great opening stint until we had some contact which took the car out of the race. Tom and Derek did a great job in the 09 car. I guess I forgot how fast Tom used to be! We used to race together in the old days and he was running times with the leaders throughout his opening stint. When the driver change came we once again threw Derek “to the wolves” as we left him out on slick tires during the continual light rain. As usual he did a great job and is really one of the most heads-up rookie drivers I have ever worked with. He has a great future as a professional racer. We had an amazing group of sponsors and partners here this weekend with PassTime USA, Royal Purple, and Calumet as well as our friends from DriverWebsites.com and Black Rider Racing Group. Also big congrats to our friends at AMR who had a terrific run in the WEC race ending up with the win in LMGTE Pro and a 1-2 in LMGTE Am. We’re looking forward to the race at Petit Le Mans and will finish this season at full strength, but we’re already in the war room planning our 2015 assault on IMSA TUDOR, Conti GS, and World Challenge – maybe even a trip back to the 24 Heures de Le Mans for us – we’ve done well there in the past and I’d like another shot at it, as well as Daytona. All of our programs are really on fire right now and we are talking to several teams about helping them field competitive Aston Martins for next year. Stay tuned.“