Braselton, GA. (October 2nd, 2014) – Since 1998 few events in North America have held the reverence of what was once the only American gateway to the famed 24 Heures de Le Mans. An event that in 10 hours tests human and machine more than some 24-hour races ever will. This event is known as Petit Le Mans, the final round in both the North American Endurance Championship and the regular IMSA TUDOR United SportsCar Championship season of competition. This grueling 10-hour enduro will pit all 54 entries against the rolling hills and high-speed bends that make up the historic 12-turn, 2.54-mile Road Atlanta circuit.

TRG has a rich history here, having won the race in 2010, 3rd and 4th in 2011, 2nd and 3rd in 2012, and 6th in 2013, after leading the race and suffering an electrical gremlin late in the grueling race. Having done so well in the few years of competition at Petit Le Mans is no accident – just as the win at Le Mans and multiple wins at Daytona were the result of some of the best preparation and attention to detail in the business.

Christina Nielsen, TRG-AMR North America Team Driver: “I feel incredibly lucky to have a seat with such a strong team with so little time before the race. This is my favorite weekend of the year and the biggest challenge will probably be to change from the Porsche to the Aston Martin Vantage GT3 during the weekend. I am disappointed that NGT Motorsport had to withdraw our car but they are 100 percent focused on achieving a good result in the GT3 Challenge. In general I am looking forward to be back with TRG as they have shown to be extremely competitive and are a good group of people. I also think we have a really strong lineup for the 10 hour race! Look for us on the podium!”

Unfortunately for the GS team, both cars have been retired due to testing accidents. Scheduled to race this weekend was TRG-AMR’s CTSC team in the DriverWebsites.com / Affinity Homes / Black Rider Racing Group 07 and 09 V8 Vantage GT4’s of Max Riddle and Kris Wilson as well as Derek Deboer and James Davison. The lethal combos in both cars were looking forward to strong runs. Riddle and Wilson are coming off of several strong performances including a recent win at Virginia and some incredible qualifying performances by Max. They were looking for nothing less than the top step of the podium with their Aston Martin V8 Vantage GT4 this weekend. 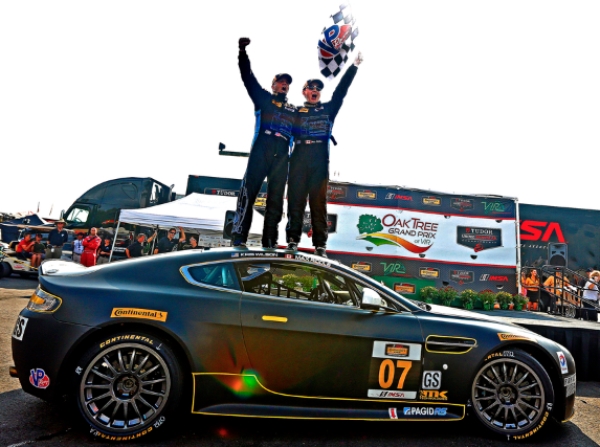 Kevin Buckler, CEO, TRG-AMR North America: “What a fantastic event here in Atlanta and we came with our guns loaded. Max and Kris have been awesome all season, but especially in the back half of the season. Max has really been on his game these last few races and has shown what he can do and he can run up front with the best of them. We were all so disappointed for Max with the brake issue in qualifying and his run into the gravel. What should have been a beached car turned into a real accident as he skidded over the gravel and into an unprotected concrete wall. Inexcusable in this day and age of track safety! We were so looking forward to having Derek DeBoer, one of our TRG-AMR team drivers, to make his debut here, but a testing accident with his co-driver and a brake problem in practice forced the car to retire. In GTD, the 007 car is going to be formidable. Our season-long driver Al Carter made the noble move of stepping aside when top level competitor and recent TRG-AMR World Challenge driver Christina Nielsen, was ready to hop in. Al has been fantastic all year and this ended up being a win-win for everybody. It’s great to have David Block back in the car and watching him crank out some incredible times in testing was just fantastic! He has come such a long way with us this year and we are proud to have him finishing the season with us in the 007. James has really been on his game with three poles in a row and of course we’re going for number four tomorrow. I am very confident in the equipment, team, and in the lineup of drivers and know we have a chance at the win which makes everyone on the team super pumped. All year our team has been incredible. I am so proud of the guys and we want to do this for them. A big shout out to our partners at Royal Purple/Calumet, Passtime, and Orion Energy for jumping on board this year with us and we are looking forward to a bright future together. The Aston Martin V12 Vantage GT3 is going to give everyone a run for their money in this final big event at Atlanta. We want to win this one bad.”