Braselton, GA. (October 3rd, 2014) – Make it four in a row! TRG-AMR team driver James Davison has placed the No. 007 Royal Purple/PassTime USA/Orion Energy Aston Martin V12 Vantage GT3 in pole position for the fourth time in as many races during the final rounds of the 2014 IMSA TUDOR United Sportscar Championship. Davison was able to push the limits and bring home the pole with a blazing 1:22.254 lap time around the historic circuit.

James Davison, TRG-AMR North America Team Driver: “What a lap! We’ve been able to put on a really good show during qualifying these last few events, mostly because of the speed and grip that this Aston Martin V12 GT3 is capable of. While we’ve had great luck in qualifying we’ve had fairly rotten luck during the races – I’m hoping that this changes for Petit and we’re able to fight for the top step of the podium. We’ve got a strong lineup for the 10-hour race, hopefully we can keep it clean and quick and bring home the win for the team, for the partners and sponsors, and for Aston Martin.” 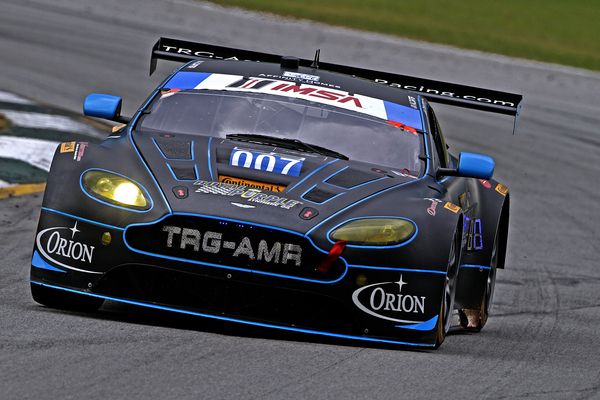 Kevin Buckler, CEO, TRG-AMR North America:“Four in a row! I’m not sure that any other team has done that for a while. We have been on our game this year in qualifying and making all the right decisions. We’ve always had good luck here at Road Atlanta – multiple podiums and the win back in 2010 – but this car works well here and comes alive on tracks that are high-speed “flow” tracks. Thanks to all our partners, especially Royal Purple, PassTime USA, and Orion Energy Systems as well as this awesome Aston Martin Racing V12 Vantage GT3 – the car is formidable. With the inquiries from other teams and drivers for next year, this is the best way to show our capabilities with this cars and program. Now it is time to go win the race. We are ready…”